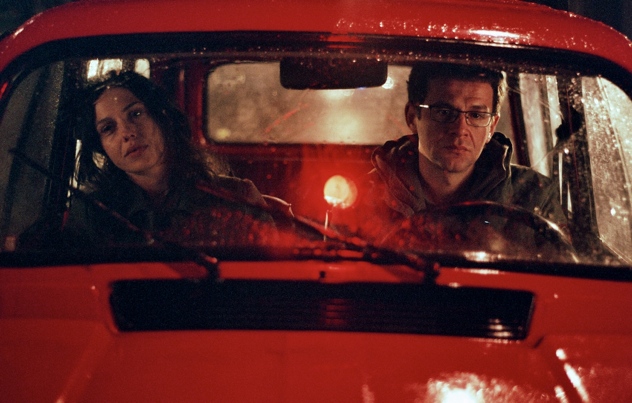 A couple was driving down a deserted road late at night. As they drove, the night became darker and darker. The girlfriend was becoming worried. Soon, the car sputtered to a stop. The boyfriend noticed that they were out of gas. No matter how many times he turned the key, his car just wouldn't turn on. Finally, he said that he would have to go back to the main road for help, since there were no houses nearby.

The girlfriend didn't like the idea of being left alone. Seeing her concern, her boyfriend folder her not to worry. He wasn't too confident, so he told her to keep the windows rolled up and the doors locked. He said he would be back ASAP and then he left.

The girlfriend did everything her boyfriend told her to do. She jumped at every noise and cowered at every shadow. Then, came the most terrifying noise, despite it being so small.

She whimpered and curled into a ball in her seat.

She began to panic. It was so dark, she couldn't see out the windows.

She started crying, unable to go out to investigate for fear of what might be making the noise.

Eventually, she fell asleep, the tapping noise echoing in the care. When she awoke, she looked at her watch. It was 9 AM. She looked out the window, but it was still too dark to see anything. This confused her.

Suddenly, she heard a voice say, "Hello? This is the police. Is anyone in the car?"

"Okay, ma'am, get out of the car, walk towards me, and don't look back, whatever you do," ordered the officer.

The girlfriend got out.

"Now, walk towards me," said the officer. "Don't look behind you."

The girl slowly walked to the police. However, halfway there, she stopped.

"Don't turn around!" yelled the cop, but it came too late.

The girlfriend turned around and screamed. There, handing from a tree branch, was her boyfriend's body. His head had been cut off. The tapping noise was from his blood draining and hitting the car, completely covering it in blood.
Posted by TheGiver at 8:02 PM