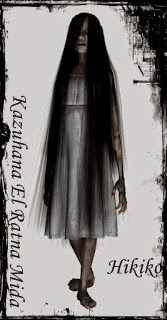 Everywhere you look now a days, you will see a sign against bullying and abuse. This is a good thing. We don't need another Hikiko-san roaming the world. Bullying and abuse are bad enough without that.

Hikiko-san is a young girl. She gets beaten by her parents at home, causing her to be slightly deformed. This deformity causes Hikiko-san to be bullied by her classmates. One day, it all became too much for her and she committed suicide, though some say she was killed by her father. Either way, the girl comes back as a human hating spirit.

It is said that one of the boys from Hikiko's class saw her spirit after her death. She was dragging the lifeless body of one of her tormentors behind her. When he told the police about it, Hikiko-san killed him that same night.

Another story goes that she would attack entire school, decapitating people or pulling off their limbs. She would drag the bodies or limbs behind her, covering the walls and floor in blood. Anyone unfortunate to enter the building during one of these attacks becomes one of the dead. Afterwards, the school would be shut down and abandoned.

Because Hikiko-san is recognized for her long black hair that often hangs in front of her face, she became the inspiration for Samara (Sadako Yamamura) in the Ring trilogy. (The Ring, The Ring Two, and The Rings)
Posted by TheGiver at 4:21 PM