The House of Mirrors 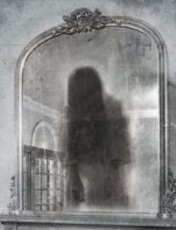 There is a house in the old part of the Spanish city of Cadiz in Mexico. The house is known as "La Casa de los Espejos" or "The House of Mirrors". It is an imposing, yet elegant, three-story house the architecture that evokes it's Spanish past. However, the innocent facade fools no one in Cadiz, because everyone believes in ghosts and knows the old home's history. They steer well clear of it at night.

The legend goes that, years ago, an important Admiral of the Spanish Navy lived in the house with his wife and young daughter. The Admiral's job meant that he was often gone for long periods of time, traveling from port to port. He visited many different and exotic foreign countries because of these business trips


The people of Cadiz say that the Admiral love and cherished his beautiful daughter more than life itself. When he left, his daughter would wave goodbye with tears rolling down her cheeks. She would miss him more than anything else in the world. It also happened that the daughter collected mirrors. So, as a token of his affection, the Admiral would bring home a mirror for her after his many trips.

As the years passed, the house was filled with many ornate and exquisite mirrors. His daughter enjoyed looking at herself in her mirrors as she walked around her home. The Admiral often boasted to anyone who would listen to him that his daughter was the most beautiful girl in Cadiz.

However, his wife had grown old and lost her looks. She hated the mirrors and became jealous of her lovely daughter. Soon, the Admiral's wife became depressed and a resentment towards her daughter grew in intensity with each passing day. When the Admiral went on his trips, she and her daughter would fight, growing more and more frequent the more jobs he took.

The mother-daughter relationship was completely destroyed by the mother's secret hatred of her daughter. She convinced herself that the Admiral loved his daughter more than his wife. So, her thoughts grew dark and vengeful.

While the Admiral was away on his last trip, his wife saw an opportunity and put in motion a dark plan. She gave her daughter a poisoned drink, and the poor girl drank it. The daughter suffered for days, bleeding from her eyes and mouth before finally dying. The Admiral's wife was so sure that she and her husband could rekindle their love with her daughter gone.

The Admiral returned a week later. He was greeted by his wife at the front door, who calmly informed him that their daughter had contracted a horrible disease and died while he was away. Upon hearing the terrible new, the Admiral burst into tears. He was completely devastated and spent the next few days just sitting in his daughter's room, weeping bitterly.

Late one night, as the Admiral was wiping tears from his eyes, he looked into one of the mirrors. What he saw made him tremble with fear. There, in the mirror, was the ghost of his beloved daughter. As he watched, he saw that final scene of her life. His daughter was sending him a message from beyond the grave.

In the mirror, he saw his wife poisoning a drink and giving it to their daughter. He watched his daughter, blood pouring from her eyes and mouth, scream in pain. Beside the bed, his wife gloated silently. The sight of his child thrashing about in agony before succumbing to the deadly poison was more than the man could handle.

Filled with shock and anger at discovering the truth, the Admiral ran downstairs and grabbed his wife by the arms. He forced a confession from her, then took her to the local police station to turn her in. His wife was put on trial, found guilty of murdering her own daughter, and sentenced to spend the rest of her days alone in a filthy prison cell.

Unfortunately, the Admiral was unable to recover from the incident. He could not live in the house where his child had been murdered and all the mirrors reminded him of her beauty. He never got over the loss of his daughter. The Admiral left Cadiz and moved far away to try and forget his past. The house lay abandoned for decades, the walls still covered in mirrors.

People who lived nearby claimed that they could hear screams echoing from the building at night. They said that is sounded like a young girl crying out in pain.

A few brave souls ventured into the house to see what or who was making the strange sounds. The noises seemed to come from the top floor. They heard the pitiful weeping and wailing of a child destroying the silence of the night. What was even stranger was that the sound seemed to bounce off the mirrors, almost like it was coming from the mirrors themselves.

One clumsy individual accidentally broke one of the mirrors They say that he picked up a piece of the glass, but he did not see his own face reflected back Instead, he was horrified to see the face of a dead girl looking back at him. She looked angry, and it sent a chill down his spine, The image made him run from the house, screaming.

Others who visited the house claimed that they would catch a glimpse of a girl watching them from inside the mirrors out of the corner of their eyes. Upon seeing her, some would flee in terror, counting themselves lucky to have escaped with their lives.

As the years passed, the history of the House of Mirrors and what occurred within its walls began to spread from Cadiz to the rest of Mexico. The legend became so famous that many teens would travel long distances to explore the old, dilapidated building at night. Most wanted to show they weren't afraid, others wanted to see if they could catch just a glimpse of the murdered girl.

Some years ago, a few young people started organizing trips to the old house. They would hold a contest to see who could stay the longest inside the haunted mansion. They say that once you spend a few minutes inside the House of Mirrors, you won't dare enter a second time...